The Crosscutters released their 2015 promotion schedule this past week. I must say, it looks pretty awesome. Some teams have had some pretty bad promotions though. Let’s take a look at the five worst baseball promotions ever.

Most, if not all baseball promotions feature some sort of giveaway or contest in order to draw fans to the game. This was the exact opposite. In 2002, the RiverDogs executives thought it would be interesting to have a game with an official attendance of zero. Thus, they locked the gates to the stadium keeping fans out until the fifth inning, when the game was official. This included season ticket holders, fans who purchased single game tickets in advance, and people purchasing tickets on game day. The team made baseball history by becoming the only team in the Minor or Major Leagues to record an attendance zero. They remained the only team to do so until the Baltimore Orioles closed a game to the public in April of 2015 due to riots in the city.

The NYPL has had some pretty classic promotions in their existence. This one should be put on the shelf and never be taken down. Just like Wheezy from Toy Story 2. The Renegades gave out toilet seat-shaped stadium cushions to 3,000 fans. I guess a square one with the team logo on it wasn’t adequate.

One would think a team with attendance troubles would put a bit more effort and excitement into a promotion. Not the Marlins. In 2008, the team gave away air fresheners for your car and inflatable guitars…in the same night. That combination is like mixing staples and milk, they are so far apart from each other by all standards. Not to mention boring. Also, why go to a Marlins game to get these things when Dollar Tree has both?

What better way to celebrate the 2008 Beijing Games than Olympic Night? However, to ensure safe and fair competition, the Devil Rays held anti-doping night two days before Olympic Night. Perhaps this was an effort to steer youth away from steroids, as they were rampant at the time in the Majors. A bad idea with good intentions. There was a giveaway this night— the first 200 fans received free urine sample cups. 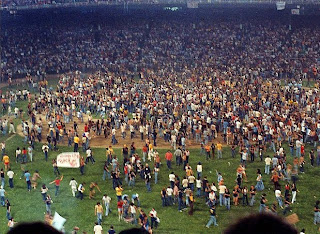 A night that will be remembered forever in baseball history. The White Sox charged .98 cents for a single admission double header to fans that brought a disco record. The vinyls would be destroyed between games via an explosion set off by Chicago disc jockey Steve Dahl. The promotion was a success, as the attendance at Comiskey Park was over double the goal of 20,000 fans. The explosion was also carried out successfully. However the events that followed were less than pleasing to baseball fans. Thousands of people stormed the field, causing the postponement of Game 2. The crowd woulds stay on the field until riot police dispersed them. Thirty-nine arrests were made. The game would be forfeited the next day by order of AL President, Lee MacPhail.

All of the Cutters 2015 promotions look fun, interesting, and safe. Check out the Promo Schedule
here.

On Thursday, Jiandido Tromp hit his team leaden seventh home run. The three RBIs plated by the dinger brought his season total to 20. Sean McHugh registered his first hit as a professional ball player. He would finish Thursday 3-3 with an RBI.

Last night, the Cutters lost to the Vermont Lake Monsters to snap their five game win streak. A seven run top of the second gave Vermont a safe lead early in the game and they also scored seven other runs, making the final 14-2. Cris Oliver took the loss.

The Cutters are now 16-12 and are currently playing the Tri-City Valley Cats at  home. This is the first of a three game set.
Posted by Ryan Sharp at 5:19 PM No comments:

Hello All. It has been a few weeks since the last update. If you didn't remember I'm a high school kid so I have to worry about work for the blog as well as home and school things. Things are settling down at the moment though, so I can get back to focusing more with the blog. Thanks for your patience.

Since the last post on June 19, the Cutters are 11-8, bringing their season record to 14-11. Jiandido Tromp is having a solid season as he leads the team in home runs, RBIs and stolen bases with six, seventeen, and seven respectively. He also shares the team lead for runs alongside Cord Sandberg, with 18.

The Cutters are currently in third place in the Pinckney Division, trailing the State College Spikes by four games. Their next game is tonight at home against the Vermont Lake Monsters. First pitch is slated for 7:05.

Once again, I would like to say thank you for sticking with the blog. It is much appreciated.
Posted by Ryan Sharp at 11:06 AM No comments:

Since the Opening Night loss to State College, the Crosscutters have won four games and lost two more. Tonight, they finished a three game sweep against Jamestown.

Highlights of the series included a three home run night on Monday, two of which came off the bat of Jiandido Tromp. These homers were a part of a night that included nine hits, all for extra bases.
FINAL Cutters 12 Jammers 5

The next night, Cord Sandberg extended a hitting streak to six games with a single in the 11th inning. He would eventually score the Cutters winning run that inning after a throwing error over the plate. Drew Stankiewicz hit a swinging bunt to force that play.
FINAL-11 Cutters 5 Jammers 4

Tonight, Sandberg extended his hitting streak to seven games while picking up an RBI.

Posted by Ryan Sharp at 7:44 PM No comments:

After a 34 minute delay to ensure the rain would pass before removing the tarp from the field, the game would get underway.

Alejandro Arteaga would allow a leadoff walk but get the next three outs. The game went on like so with not much offense from either team. State College’s Dewin Perez faced just one over the minimum in his five innings of work.

The scoring got underway in the top of the fifth. Chris Rivera got on base, then took second on a failed pickoff attempt, then third on a balk. Brian Vigo-Suarez then drew a walk followed by a Jhohan Acevado single that scored Rivera. That was the first run of the game and the Spikes would score three more. That was before Rowan Wick stepped up to the plate. He took pitch over the wall in left center field that gave him two RBIs and his team a 6-0 lead.

State College would add on a run in the seventh, all of this while the Cutters had only managed one hit. Cord Sandberg had a bunt single in the fourth.

In the eighth, Wilmer Oberto was on first when catcher Deivi Gullon hit a double for the RBI. Sandberg’s second infield hit of the night came later in the inning and it scored Herlis Rodriguez. Sandberg would follow him in after a Jiandido Tromp double.

Those three runs would be all the Cutters would score, but the Spikes weren’t quite done. Rowan Wick hit his second home run of the night in the ninth inning, a three run shot, making the score 10-3. Wick would finish the night with 5 RBIs.

The Crosscutters open up their season tonight at 7:05 against the State College Spikes. The pitching matchup is between Dewin Perez for State College and Alejandro Arteaga for Williamsport.

In 2013, Arteaga had a 3.45 ERA in ten stars with the GCL Phillies and Clearwater. He started the 2014 season in Lakewood but was demoted to Williamsport after posting a 3-6 record with an ERA of 9.23

The Cutters won their opener last year at State College but dropped their first game at home to the Spikes the following night in extra innings.
Posted by Ryan Sharp at 3:24 PM No comments:

2014 will be Williams’ first season as a manager and I asked if he would take any special approach to this year. He said the team would “focus on fundamentals and the little things like bunting and scoring from third.” also stating that this is how games are won. There is only one draft pick in Williamsport this year, but there were more last season. When asked about the typical acclimation period Williams thought the biggest adjustment is “playing every day with a stronger focus.”

Mitch Gueller is one of a few returning players this season. I asked if there were any specific improvements since last season. He says he has “a new mental approach” and he is “excited to show it in games.” He also has switched his pitching arsenal around. “I was throwing a curveball but it wasn’t really working,” Gueller said. “I throw a slider now.”

Before I dive into my interview, I would like to thank Gabe for allowing me to return as a blogger this season and helping me out as I go.

Opening Day is exiting for any baseball fan, and when asked about his excitement he said “Always, I’m always excited for it.” A brief statement, but very true for all followers of the game. The Cutters got a new playing surface at Bowman Field last year and will be using the same surface in 2014. Gabe was sure to compliment the grounds crew on keeping the field maintained. “It’s the same surface, but it looks brand new though,” Sinicropi said.

The Cutters open up the season tomorrow night at 7:05 against the State College Spikes.
Posted by Ryan Sharp at 8:49 AM No comments: